When The Marvelous Mrs. Maisel hit Amazon Prime, my mother suggested we watch it together. The first season was great, top-notch stuff. That said, I couldn’t help but notice that there was something familiar about it.

Look, is it a carbon copy of Gilmore Girls? Obviously not. (Have you seen those costumes? Incredible.) But even without Rory, there are a lot of similarities between the two. It’s very common for writers to have archetypes that they like to fall into. A great example of this is Ryan Murphy with Glee, American Horror Story, Ratched, and Pose. Only American Crime Story feels different because the characterizations are based on very real people. I mean, some of Elektra Wintour’s dialogue sounds like it could be spoken by Sue Sylvester and it wouldn’t feel out of place.

But again, writers have archetypes and narrative habits that they tend to fall into. Let’s take a look at the Maisel/Gilmore comparison:

Both Gilmore and Maisel love a judgmental parent moment. The stakes have doubled for Maisel since Joel’s parents are entwined with the family through marriage and grandchildren. Although there are justifiable criticisms about the inclusion of the kids, but that’s a problem does not apply to the argument of comparing these to shows. The only connection really is that neither Amy or Dan Palladino have an interest in writing children. Anyway!

Though Emily is sharper in her disapproval of Lorelai, she and Mama Maisel have a habit of putting down their daughters as often as possible. They’re traditional, they don’t understand why women don’t get married or stay married. Not to mention the short subplot of both women separating from their husbands only to go back to the way things were.

Then there are our beloved academic patriarchs. Abe Maisel and Richard Gilmore could spend seven hours in a library reading books not speaking a word to each other. And then they would leave saying, “Nice fellow. We should invite him back.”

Where the shows differ is the focus of the parental relationships. One could argue that the father-daughter storyline in Maisel is more prevalent than the mother-daughter storyline. Gilmore Girls is defined by its generational mother-daughter relationships from Lorelai to Rory and Emily to Lorelai. But you can argue that if you get Tony Shahloub, you do what you can to get as much screentime with him as you can. Because when it comes down to it, the Gilmores and the Maisels have more in common personality-wise than some might care to admit.

In the original pilot of Gilmore Girls, Luke was originally Daisy. That’s right, our favorite grumpy diner owner turned Mr. Gilmore was written as a woman. Network being what it was at the time, WB execs suggested that maybe there was too much estrogen. On top of that, Amy Sherman-Palladino claims that Lorelai’s best friend and chef extraordinaire Sookie was written as a gay woman. On top of that, the actress originally cast as Sookie in the presentation pilot? Alex Borstein herself, the same woman that went on to play Susie in Maisel and win two Emmy’s for it. The actress that replaced Borstein was future comedy superstar Melissa McCarthy–sorry, two-time Academy Award nominee, Melissa McCarthy. 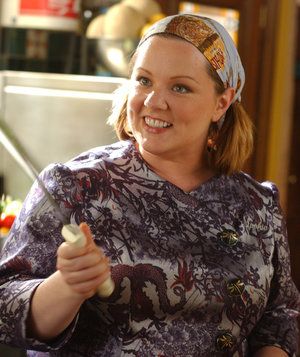 And thus the LGBT+ attributes that ASP envisioned was pushed to the side for a love story between her and vegetable farmer, Jackson.

So here’s Susie, aspiring showbiz manager extraordinaire, grumpiness intact and butched up. The banter between Midge and Susie has many commonalities between Lorelai and Luke’s, except now that pesky sexual tension isn’t involved. Although, if you go into the fan community, some might see it differently. If only they would actually let Susie be an out lesbian and explore that side of her character rather than have people misgender her for the sake of a joke.

Plus, who can forget all three characters’ affinity for having headgear at all times. Backward baseball caps, bandanas, newsboy-style flat caps.

Just like Lorelai can’t quit Christopher, Midge can’t quit Joel. The audience is told over and over again that these two were meant to be. It’s very much a “tell don’t show” vibe, but hey! We’ve all had that one relationship that is impossible to let go of. Especially when those two love-addicted people share a child together.

More importantly, they serve as the obstacle in the love story at the center. For Gilmore, Christopher was the wrench in the Luke and Lorelai ship. In Maisel, the love story isn’t about a will-they-won’t-they between Midge and another man. It’s Midge and her career. Her newfound love of comedy. And having Joel as a mainstay character as opposed to the recurring guest star adds a consistent temptation to Midge opposed to Christopher’s surprise “I’m still in love/can’t stop sleeping with Lorelai” conflicts.

Midge Maisel and Lorelai Gilmore are the Same Person

Midge and Lorelei are the same person. You cannot tell me otherwise.

Two fast-talking chicks that are perfect at everything they do, constantly have people falling in love with them, continually fat-shame men and women, and they have hearts of gold. I personally hate this phrase, but it’s true—they are the late 20-something, early 30-something Mary Sue. This is not meant to be derogatory as they phrase has become in recent years. In the basic Mary Sue trope, the lead female character is often the stand-in for the author of a piece and the world revolves around them.

And it’s hard not to see Amy Sherman-Palladino and not think that maybe there’s more of her in Midge and Lorelai than anyone cares to think. Some might think that it’s lazy writing, but from a different perspective, this makes perfect sense. Listen to ASP talk in an interview, and you can hear Lorelai and Midge. There’s a little bit of her other characters too, but underneath the Mardi Gras steampunk top hats, there’s this woman with all of the bravado and grace in the world. And it seems like only in her fiction that she can let a little bit of that out.

That all being said, I’m going to say this: Repeating a story or characters isn’t necessarily a bad thing.

As audiences, we praise those who dare to be different. We find this most often with actors, people willing to change their appearances or take dramatic roles after years of playing comedy. That’s often where people get the idea that varying your creative experiences should be praised. But there’s a comfort in the expected. I love intense dramas that surprise me with how far a character is willing to go. At the same time, I know what to expect from shows like Parks and Recreation, Schitt’s Creek, and Community. And the same goes for Gilmore Girls, The Marvelous Mrs. Maisel, and yes, even Bunheads.

The more I write for my own projects, the more I realize that this is not necessarily about repeating ideas. Writing what you know isn’t only about writing what you know. It’s about taking what you’ve done before and growing from that. It’s writing what you’ve learned. Has Amy or Dan Palladino learned or changed much? I don’t know. There are definite overlaps, but there are notable differences as well. Like a recipe that they are trying to perfect. And that’s just as valid as George Miller doing Mad Max movies one second and Babe: Pig in the City the next.

1No, I did not watch Season Six or Seven because I heard about the “Luke has a secret child” storyline, my least favorite trope of all time. It’s not you, child actors, I promise.